Canceling the Apocalypse - What To See This Weekend 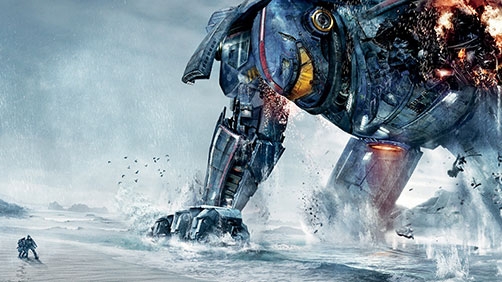 To find out whether we survive the monster apocalypse coming sometime in the near future, you’ll need to see Guillermo del Toro’s newest film, Pacific Rim. I’m not going to spoil it too much for you, but let’s just say that there are monsters and robots and lots of big stupid summer action.

I was a little worried about this film at first. It looked for all the world during the first phase of the promotional campaign like a big stupid action movie — all fluff and no substance. The tide of the campaign slowly began to turn more toward the human drama aspects as the film’s release date drew ever nearer, and finally started getting me a little bit excited for the film.

And now, having seen the film last night, I can say it is about what I expected. Yes, there is a whole lot of crashing things around, big aliens meet up with big robots and they throw each other around a lot and tear stuff up. And yeah, there’s some cheesy dialog, over the top action, way over the top humor, even some cartoonish elements. And yet, the film did have some substance, it did have some human drama, even if I wanted a little more than what I got. I’m still mulling over my star rating. I don’t know if I’m ready to give it 4 stars. Probably 3.5 out of 5. It’s worth seeing as a summer action blockbuster.

When legions of monstrous creatures, known as Kaiju, started rising from the sea, a war began that would take millions of lives and consume humanity’s resources for years on end. To combat the giant Kaiju, a special type of weapon was devised: massive robots, called Jaegers, which are controlled simultaneously by two pilots whose minds are locked in a neural bridge. But even the Jaegers are proving nearly defenseless in the face of the relentless Kaiju. On the verge of defeat, the forces defending mankind have no choice but to turn to two unlikely heroes—a washed up former pilot (Charlie Hunnam) and an untested trainee (Rinko Kikuchi)—who are teamed to drive a legendary but seemingly obsolete Jaeger from the past. Together, they stand as mankind’s last hope against the mounting apocalypse.

A little better than I thought, and certainly a lot better than the first installment in the Despicable Me franchise. Yeah, it’s a little bit slapstick and times, and the humor is not always of the highest form, but it is pretty fun. We talked about it on The MovieByte Podcast episode 51, you’ll want to check that out. I rated it 3 of 5 stars. It’s sort of worth seeing.

Now that Gru (Steve Carell) has forsaken a life of crime to raise Margo, Agnes and Edith, he’s trying to figure out how to provide for his new family. As he struggles with his responsibilities as a father, the Anti-Villain League – an organization dedicated to fighting evil – comes calling. The AVL sends Gru on a mission to capture the perpetrator of a spectacular heist, for who would be better than the world’s greatest ex-villain to capture the individual who seeks to usurp his power.

This film is certainly a dismal failure at the box office, but ultimately I enjoyed it more than Despicable Me 2, and I certainly don’t have the same issues with it that most critics seem to have. I rather enjoyed it, even if it did have it’s flaws. I talked about both the good and the bad on The MovieByte Podcast episode 51. Chad shared many of the same opinions with me on the episode.

Native American spirit warrior Tonto (Johnny Depp) recounts the untold tales that transformed John Reid (Armie Hammer), a man of the law, into a legend of justice—taking the audience on a runaway train of epic surprises and humorous friction as the two unlikely heroes must learn to work together and fight against greed and corruption.

Having seen the film, I can say, don’t take your kids (duh, it is rated R after all). In many ways this film was fun, in some ways though, this film pegged out my cheese-o-meter. In general I feel like this film is a missed opportunity. If they had toned down just a bit of the over-the-topness, and cut down the foul language just a little, they could have had a really great film here. As it is, I was a little disappointed. I’ll find time to write my full review soon.

Uptight and straight-laced, FBI Special Agent Sarah Ashburn (Sandra Bullock) is a methodical investigator with a reputation for excellence–and hyper-arrogance. Shannon Mullins (Melissa McCarthy), one of Boston P.D.’s “finest,” is foul-mouthed and has a very short fuse, and uses her gut instinct and street smarts to catch the most elusive criminals. Neither has ever had a partner, or a friend for that matter. When these two wildly incompatible law officers join forces to bring down a ruthless drug lord, they become the last thing anyone expected: buddies. From Paul Feig, the director of “Bridesmaids.”

See or not: Worth seeing if you can take the foul language and some over the top cheese.

We also ran a review from Chad Hopkins, and Chad joined me on the podcast to talk about the film as well.

I enjoyed this film quite a lot and it’s highly recommended if summer blockbuster action is your thing. In spite of the copious amounts of summer action there was actual human drama and plot, and a lot of fun. I wrote a review, and Chad and I talked about it on The MovieByte Podcast. I give it 4 of 5 stars.

I hated this film so much — SO MUCH. I had reconciled myself the reboot and even got to the point where I was looking forward to the film immensely, and I was blow away by how bad it was. If you want to look up the definition of bad filmmaking somewhere, I’m pretty sure Man of Steel would be listed somewhere in the prime examples of such. This film has no heart, it is disjoined and non-linear in a way that does not work, it left me feeling emotionally disconnected from the story and the characters and it left way too many things of the plot to chance instead of being intentional. That’s not to say there weren’t some things to like, but the bad far outweighed the good. I can’t recommend this film.