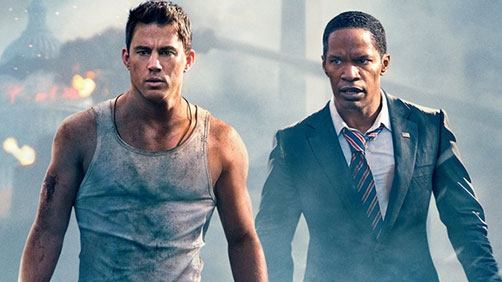 In the latest from director Roland Emmerich, the White House is under attack for the second time this year, and as much as I liked Olympus Has Fallen and gave it 4 stars when I talked about it on the podcast, White House Down almost wants to make me downgrade Olympus Has Fallen, by a half star. The reason is because I don’t feel this film merits 4.5 stars, but I also feel like it’s a little better than Olympus Has Fallen. So it’s sort of that strange in-between place for me. I’m sticking with 4 stars for both of them.

Roland Emmerich At It Again

Man, Roland Emmerich has a thing with blowing up important landmarks, doesn’t he? Let’s take a count:

It seems Mr. Emmerich gravitates toward destroying the White House because he’s at it again. And we might as well blow up the capitol building while we’re at it, eh? The guy really loves his disaster films.

To be honest with you, I have only seen two previous Roland Emmerich films: Stargate, and Independence Day. Neither of those films were great. Don’t get me wrong, two of the three Stargate spinoff series, Stargate SG-1 and Stargate: Atlantis, are two of my most favorite television shows ever. But Emmerich’s original Stargate film is a bit lackluster in my opinion. And I know a lot of people loved Independence Day, but I didn’t really love it. And in fact, nothing on this director’s list of films is really super appealing to me. I know I need to see a few of them and maybe I’ll actually like them, but where does the time go?

Of all the things I really appreciated about this film, one of the big ones is that the cinematography was solid and the action was easy to follow. This is probably one of the biggest perks of going with a more established director in film these days. The predominant tendency for younger and “more hip” directors and filmmakers is to shake that camera as hard as you possibly can! The cuts should be impossibly fast, and it should be all chaos: nothing should make any sense. I’m here to tell you I hate that style. Roland Emmerich’s old school approach may be just that: old school, but it’s quite refreshing to me. I had no trouble keeping up with what was going on.

In addition, we got some pretty cool shots, no doubt aided or accomplished completely by CGI, of the White House and other cool aerials, but cool none-the-less.

Many have been critical of Channing Tatum’s ability to act. I, for one, do not think he is a bad actor per se, but he’s been in some bad films, unfortunately. Let me assure you that his performance here is solid. As John Cale, the protagonist, he was quite likable, a necessary trait for a protagonist, wouldn’t you say? I certainly cared what happened to him, and I felt his pain when he was trying to mend his relationship with his pre-teen daughter. And he’s been a bit of a screwup, and he’s trying to get his life on track. He’s got a shot at being on the president’s secret service detail, but unfortunately, Finnerty (Maggie Gyllenhaal) used to know him, and knows he was a screwup, so he’s off the list. But while he’s at the White House, he goes on the tour with his daughter and gets caught up in the action. It’s all pretty believable.

No less the star of the show here is also Jamie Foxx as President Sawyer. With obvious inspiration from our current President, but with perhaps just a bit more cool and suave, Foxx delivers a great performance, and ultimately does what it takes to protect his country. There is a nice surprising twist for him toward the end of the film, I won’t spoil it, but he stays strong and doesn’t do what you would expect him to do.

No doubt the cutest star of this film is Joey King as Emily Cale. Way too smart for her own good, politically inclined and aware, and excited beyond belief to be in the White House, she pulls off a quite believable bad attitude pre-teen who’s not so happy with her somewhat absent father. Some have complained about how no girl her age can be that smart and involved and aware. They have obviously not been around the same 11-12 year olds I have. I liked her a lot.

The two main villains, James Woods as Special Agent Walker, and Jason Clarke as Stenz do an admirable job here as well, making light work of believable villainy and destruction, even if Walker’s motives were a bit too… written… lacking a certain actual real world feel.

One of the big surprises to me — I wasn’t even aware he was in the film — was Lance Reddick whose work I know from Fringe. I knew from that show that he’s a quite talented actor. But even though we’re seeing more and more crossover between TV and film than we used to, I was still a little surprised to see him in this blockbuster film, and in a role that was fairly prominent. I’m a fan and he pulled of the role well.

I’ve not even mentioned all of the actors here, which speaks to the level of talent involved, but I have to give a shout out to Maggie Gyllenhaal. She unfortunately got on my bad side through no fault of her own by taking over the role of Rachel Dawes in The Dark Knight. Katie Holmes had been so perfect in the role in Batman Begins that the idea of replacing her was repugnant to me. Upon more recent viewings of The Dark Knight I realize that if I remove my irritation from the equation, she did a fine job in that role, and had she been first I would have liked her just as much as Holmes. Still, I had some prejudice against her that is now totally gone. She owns her role here in White House Down so well that I can no longer hold The Dark Knight against her. Job well Done Maggie!

A big component of this film that makes it work so well is that it doesn’t take itself too seriously. It’s serious enough to work, but it has it’s light moments, most of which are the banter and lightness between Channing Tatum and Jamie Foxx, which works beautifully. It’s quite obvious that these two stars have a good rapport on and off screen. And seeing President Foxx Sawer fumble around to get his glasses on before taking out a bad guy is side-splittingly hilarious.

Talking politics is a great way to find myself losing a lot of friends and falling out of favor with EVERYONE. And I do mean everyone. Let’s just say I often find myself not fitting in on either side of the aisle. But I have to address it because this film is laced with politics. So you know where I’m coming from, I’m technically a Libertarian leaning Conservative. That tends to mean that in matters of foreign affairs run-of-the-mill conservatives call me a liberal, and in matters of government control and oversight, Liberals call me a right wing nut job. It’s okay, I can take it.

It’s no secret that Roland Emmerich is pretty liberal politically. I would say that many conservatives are going to find this film repugnant. I personally didn’t have a problem with a good 75% of the views presented due to my libertarian leanings. But if you are conservative and reading this, the chances are you are going to have a problem with the idea of pulling back the troops and making peace with the nations of the middle east. Be aware too that one of the “bad guys” is classified as a “right wing nut job”. That’s fine with me personally because there are some right wing nut jobs out there who would do this. Yet at the same time it was potentially the most bothersome to me because there are left wing nut jobs out there too. I didn’t get too worried about it though because, really, who cares?

At the same time though, I felt the film was a bit conflicted. While promoting peace out of one side of its mouth, the film is also a shoot ‘em up, the White House is being blown up kind of film. And it puts military weapons in the hands of the president, and he uses them, and this is not a bad thing. This essentially says, it’s okay to use weapons when necessary. And I liked that. But given that, it’s easy to see why both Liberals and Conservatives are both panning the film a bit.

The one big aspect that I actually appreciated is that the threat, the terrorists, the bad guys were from within. No Koreans or Arabs. I liked it because it was less clichéd, and that’s a good thing.

In the end, I found it to be a pretty satisfying summer block buster. Yes, there are elements of it that are kind of stupid, and yeah, things go boom. Also, of course the premise seems a bit far fetched, I have significant doubts that something of this scale could actually be pulled off, but I suppose it’s a little bit possible, after all, there was 9/11. Maybe it just feels far-fetched because we don’t want to believe that it could happen. But beneath all the booms and action is a great cast, some great human interaction and drama, and a story with heart as well as a few political themes I actually liked (you may commence the flame throwing). It’s a good summer blockbuster for you to head out and see in my estimation.