Corey wrote the official MovieByte review of World War Z, but Chad also had some thoughts and I thought I would change it up a little and run this as an article. He’ll be on the podcast with me today at 3:00 PM CDT to talk about the film. 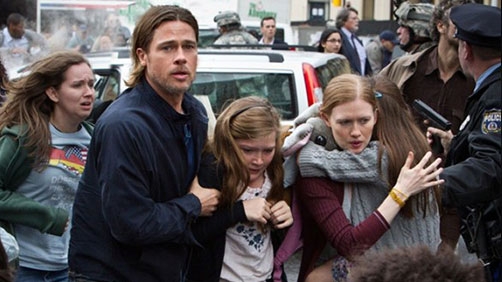 How does one judge a zombie film? I’ve personally never had any interest in the genre; in fact, I’m not sure if I’ve ever seen a zombie film or television show about zombies before now, excluding 2007′s I Am Legend (which I’m not counting because the “creatures” in the original book by Richard Matheson that the film was based on were actually vampires). It’s a genre that I’ve always been skeptical of, so I wasn’t even sure if I wanted to see World War Z…frankly speaking, the trailers didn’t make me at all interested. However, I finally saw it, and, guess what? Wow.

Based on the book by Max Brooks, World War Z focuses on Gerry Lane (Brad Pitt), who finds himself with his family when a pandemic strikes, throwing their home city and the entire rest of the world into disarray as the virus spreads. Gerry, who is a former United Nations investigator, uses his connections in the government to have his family evacuated to a safe haven on on US Navy vessel. Upon arrival, he is told that his talents are needed in order to find the origin of the virus so that a cure can be created, with the threat of his family being removed from the ship forcing him to comply. As he searches for answers, he must use both his brains and his brawn to survive the rapidly spreading pandemic in order to save the world.

I mentioned I Am Legend earlier because I was getting lots of I Am Legend-y vibes while watching the film: both stories essentially tell the story of a man fighting a world-destroying virus in search of a cure. This may seem pretty generic, but, as my best friend pointed out to me, there is even a moment in WWZ when Gerry wakes up hanging upside-down with blood dripping from his head and a piece of metal stuck in his body…sound familiar?  The zombies as presented in this film are remarkably similar in behavior to the creatures of the I Am Legend film adaptation, though, as I mentioned, the creatures in the original book are actually intelligent vampires that are capable of speech. It’s easy to see the similarities between these two stories, but honestly, I didn’t feel like this film was a direct rehash of the Richard Matheson classic.

One aspect of the film that I find particularly surprising is how much it makes me care for the characters. This genre of film is not one usually associated with high-quality drama, but its commitment to taking itself seriously and focusing on more than just action makes it more than just a summer zombie action flick. Gerry’s relationship and split with his family feels both genuine and, as a result, painful, as we’re forced to see them separate in such a volatile situation. Brad Pitt brings quite a bit to the role, with Gerry’s obvious dedication and commitment to the task at hand and to the people around him, even those he doesn’t know, bringing a depth to the character that didn’t need to be explained to be conveyed.

The film’s attention to detail is also admirable. At one point while we were on the US Navy ship, I saw people storing what appeared to be large framed paintings, which I took to mean that they were trying to preserve whatever culture and art that they could in the wake of this disaster. There are many subtleties along the same lines that appear throughout the film, which I appreciate quite a bit. The score by composer Marco Beltrami, which I admittedly haven’t purchased or listened through, worked well in the film, but the most compelling parts of the score in the context of the film are the moments in which there is complete silence aside from the on-site action; for example, there is one scene toward the beginning of the film in which Gerry and his family are running away from approaching zombies where all we hear is the sounds of the family running and of the chaos surrounding them. It’s a powerful device that isn’t always used well, but silence as a tool is put to good use several times here.

I asked at the start of this review how you can judge a zombie film – a genre that is meant to be full of blood, gore, and mindless action. Thankfully, I don’t have to answer that question just yet because, although this film has zombies in it, it is so much more than a “zombie film.” World War Z manages to surprise in a good way; it’s full of heart, suspense, and, heck, there’s some good action too, and it balances these aspects in a way that makes it better than your average summer blockbuster.