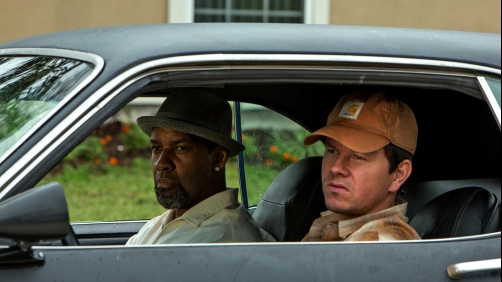 Well it wasn’t terrible but…

What a horrible way to start a review, right? I mean, I want to say something nice about this film because I didn’t hate it. It was entertaining and enjoyable on a few levels, but on other levels this film also failed to deliver. That makes this film kind of mediocre.

Yet on the other hand, this film has a couple of problems, and one very significant problem, hence: it wasn’t terrible, but…

This film definitely has a few more curve balls in store than the average film plot these days, and that’s not actually a negative thing. Often, it seems to me that films tend toward one of two extremes: either they have very little plot, or they have too much complication in the plot. This film actually feels just about right as far as that sort of thing goes.

As it turns out, this is sort of a buddy cop film of sorts, only the buddies are neither buddies (at first) nor cops. Criminals Robert “Bobby” Trench (Denzel Washington) and Michael “Stig” Stigman (Mark Wahlberg) seem to be in the business of selling drugs to drug lord Papi Greco. But there seems to be more than meets the eye going on here. Bobby is an undercover DEA agent who is using Stig to get to the root of the drug supply, unbeknownst to Stig.

On the other hand, Stig is working for the Navy, unbeknownst to Bobby. So they are each trying to play each other, thinking the other is a criminal. After they pull a heist together, thinking they are getting a drug Lord’s money, and instead acquire significantly more than they were expecting, to the tune of $43 Million smackaroos, things get a little crazy and it turns out they have both been played and betrayed by people they weren’t expecting. And this is where all the twists and turns come about, and most of them are decent. In fact, only one annoyed me, which I’ll get to.

Among the better aspects of this film is the fact that, believe it or not, Denzel Washington and Mark Wahlberg definitely have good on-screen chemistry. Though their acting styles are as different as night and day from each other, it works surprising well in contrast to one another — almost (though not quite) in the same way that Tommy Lee Jones and Will Smith work surprisingly well together in the Men in Black films.

Every bit as worthy of attention here is Edward James Olmos. You all may remember him from Battlestar Galactica. It’s kind of funny because here he’s playing a Mexican drug lord and he both looks and speaks the part. But I never thought of him as Mexican before. Almost immediately after the film, I was looking him up on IMDb, and sure enough, there in his personal info it says he is of Mexican decent. Weird that, since I never saw Commander Adama as a Mexican before. But in any event, he is every bit as essential to this film as Washington and Wahlberg, completely stealing the show each time he is on the screen. His adversarial presence is formidable and believable.

The primary theme in this film is corruption. First, there’s the corruption of the Navy. As it turns out, Stig’s orders haven’t been coming from the “Navy” per se, but from a corrupt commanding officer who’s just in it for the cash. And when Stig is finally able to get into the naval base and confront an Admiral with the facts, the Admiral turns a blind eye to keep the Navy’s association with criminals in the dark.

Then there’s the CIA. They seem to do whatever the heck they want, kill whoever they want, and take whatever money they want. As a face for the CIA, we have Bill Paxton, and he is also marvelously evil any time he is onscreen. During the first interrogation we see him conducting, without flinching, he shoots a guy right in the knee in order to get the info he wants. This sets the tone and gives him an undeniable gravity and presence throughout the rest of the film.

Then there’s Bobby’s boss/contact/girlfriend, Deb (Paula Patton). And here the film runs into a little bit of trouble. We don’t spend a lot of time getting to know her, but the plot basically hinges on her, and the film is confused about whether she’s supposed to be the damsel in distress or the femme fatale. As it is in the film, she’s a bit of both, but since we never get invested in her as a character it doesn’t have the impact it should have, certainly not the impact that we wanted it to.

Unfortunately, this film does threaten to get a little bit bogged down, and part of this is due to the fact that we get a tease of a scene where our two protagonists are about to rob a bank, set fire to a diner — and then, FLASHBACK, we’re selling drugs to a drug lord in Mexico. It’s rather strange. And what’s worse is that the burning of the diner makes no sense whatsoever. Why did they do it? What tactical advantage did it provide, how did it fit into the grand scheme of things? Why burn down a diner right next to the scene of the crime you are about to commit? I don’t get it.

No, the only obvious answer is that the filmmakers wanted something to open the film with that was both cool and interesting, and a surefire way to make it look like both of our guys were criminals. Well, guess what, they succeeded on the later because, hey, burning a diner for no reason is something only criminals do! Congratulations.

In addition, at some point you realize, every. single. person. in. this. film. except our two heroes are completely corrupt and unable to help or do anything good. You’ve got the drug cartel, the navy, the CIA, and the DEA all gunning for these two guys. It’s them against everyone else, so of course our two heroes are going to win, hands down. I mean, what other outcome is there, right?

I’ll take a side of nudity with my story, please

This is unfortunately why this film gets such a low star rating from me. I have a rule of thumb when it comes to this sort of things, and that is anytime there is sexual nudity for any reason in a film, my star rating automatically drops by a whole star. The only purpose it can have is to offer the males in the audience an incentive to like the film. It is a focus on the wrong things, it takes away from the story telling and becomes about sexualizing and objectifying. And very early on in this film, Paul Patton shows it off with some upper body nudity. The thing is, I like Paula Patton as an actress (or is it actor, these days, because I’m confused. On the one hand, they want to eliminate gender in use of terms like actor/actress, but then they strip off Paula’s clothes because of her female sex appeal), but this just makes me lose a lot of respect for her. If you’ve got the acting skills, why would you need to take your clothes off to keep people entertained?

Scenes such as the one in which we glimpse the nude upper body of Paula can easily be shot in such a way as to convey the what’s going on without showing us the indecent exposure. It’s a sure way in my mind to ruin an otherwise enjoyable film.

So my verdict is, definitely wait for this one on home video where you can filter/skip the early scene in question. I don’t normally get overly worked up about stuff as you know, but we all have our lines, and this is mine, and this is my recommendation. The film would have earned a 3 star rating from me, but the nudity cost it dearly in my opinion. Still, the plot is worthy and the film is otherwise well done.