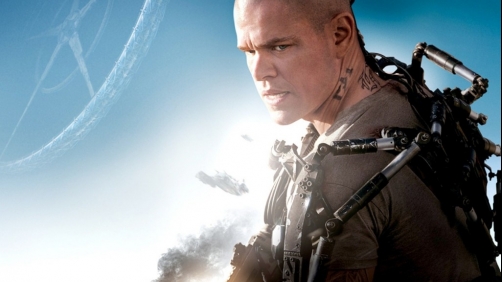 When your first film is a major commercial and critical success like District 9, seeds of anticipation and worry are planted in the collective mind of your audience. Questions start crowding to the surface: “Is this guy for real? Is he a one-hit wonder? Can he do it again?” Needless to say: Neill Blomkamp‘s Elysium had ginormous shoes to fill, serious expectations to meet, and a lot to live up to. Did it succeed? Yes… and no. Mostly no.

It’s Better Up There

The year is 2154, and society is divided into two classes: the wealthy, who live on a man-made habitat called Elysium, and the not-so-wealthy, who live on a diseased and overpopulated Earth. Matt Damon plays Max, an Earth-dweller determined to reach Elysium by fair means or foul. Jodie Foster is Delacourt, Elysium’s Secretary of Defense, equally determined to keep trespassers like Max off of her precious habitat - even if it means shooting them down in cold blood. Sharlto Copley, who played the hero Wikus in District 9, makes an appearance here as Kruger, Delacourt’s lunatic henchman.

The best thing about Elysium is undoubtedly the look of it. From the gritty, grimy dumps of futuristic LA, to the pristine paradise itself, this film is dressed to impress, and it does; in my opinion, it’s the most visually-arresting movie we’ve seen all summer (which is saying something, if you consider the competition). Combine this with Blomkamp’s talent for crazy cool sci-fi tech – a talent so amply demonstrated in District 9 – and it becomes hard to oversell how amazing it all really looks. (Come on, y’all. I can’t be the only nerd who wants an Exo-Suit for Christmas.)

The cast is well chosen – which is not at all the same as saying the cast is well used. Matt Damon and Alice Braga (I Am Legend, City of God) are given plenty to work with, and both pull off confident and convincing performances. Foster and Copley, however, are criminally underwritten. This is a shame, and particularly so in Copley’s case. As Kruger, he’s given little to do except make violent threats and carpet-bomb the dialogue with F-words. When all is said and done his character is more cartoonish than any kind of scary. Why the waste?

In my review of District 9, I praised the action scenes for packing “the kind of staggering, down-for-the-count wallop that most Hollywood actionfests could only dream of delivering.” Elysium delivers more of the same. Almost. The combat is impressively staged, but given the overuse of shaky cam, the wow factor is significantly diminished. I’m not averse to shaky cam in all cases (I think it worked well, for instance, in The Bourne Surpremacy), but here it is simply disorienting. I wanted to grab the camera man and tell him to “hold still, for goodness’ sake!” Attaching your camera to a pogo-stick does not count as good cinematography.

“Our movie is a political statement,” Mr. Copley [said]. “It doesn’t shy away from controversial ideas.

That’s what Sharlto Copley told The New York Times. And he’s right: more than anything else, Elysium aims to be controversial and make a splash. I can usually appreciate that (to some degree), even when I take issue with the “statement” in question. The problem here is simply that Blomkamp gets too comfortable on his soapbox. Way too comfortable. Which leads us to the next question: why is he using soapbox to begin with?

In the same way many Christian films are guilty of turning stories into tracts, Elysium often feels like a thinly-veiled lecture on immigration reform and the evils of privatized healthcare. It’s the haves vs. the have-nots, and if you were expecting the slightest bit of subtlety or nuance, forget it. There’s more nuance in a baseball bat. Taken by itself, the story is reasonably entertaining (if somewhat predictable), but as political/social commentary, it just doesn’t work.

It’s too clumsy, for one thing — too preachily obvious. (Should any viewer be doubtful of the film’s agenda, Blomkamp and his writers make sure to set him straight with lots of overblown Occupy-style rhetoric in the script.) For another, it’s too simplistic, too extreme. “Evil rich vs. noble poor” might be your theme, but don’t ask me to buy it as an honest reflection of reality. A straw man has no spine, and neither does the allegory in Elysium.