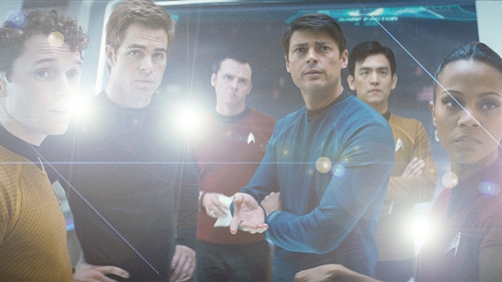 If you’ve seen a single second of Abrams’Star Trek you know the film is stuffed with audience blinding lens flashes. J.J. Abrams admitted he got a bit carried away, but explained why they’re there.

At the Star Trek press conference this weekend, J.J. Abrams addressed the press and when it was io9’s turn, we asked him the one thing that had been plaguing us since the first shiny Trek clip was released:

[Smiles] I don’t know what you’re talking about. [Laughs] I’m kidding. I know what you’re saying with the lens flares. It was one of those things… I wanted a visual system that felt unique. I know there are certain shots where even I watch and think, “Oh that’s ridiculous, that was too many.” But I love the idea that the future was so bright it couldn’t be contained in the frame.

I’m glad he recognizes that he went overboard, but even the very argument for using them so much is extremely weak. It’s frustrating that he couldn’t detect how overboard he went right away and do something about it before the film even hit the screen.