Joss Whedon on Ultron And Differing From Comics 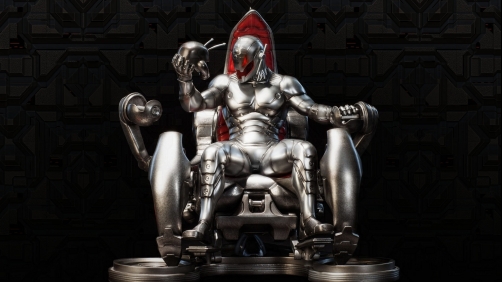 Created by a scientist in the Marvel comics, Ultron is a self-aware robot who develops a lust for power. He has a laundry list of abilities — super-human strength, speed, stamina, durability, flight, mind control, a coma ray and a genius intellect. For Avengers: Age of Ultron, Whedon reveals to Entertainment Weekly in this week’s cover story that he’s stripping back some of Ultron’s abilities and will find a way to humanize — to some degree — the angry bot.

“I knew right away what I wanted to do with him,” Whedon says. “He’s always trying to destroy the Avengers, goddamn it, he’s got a bee in his bonnet. He’s not a happy guy, which means he’s an interesting guy. He’s got pain. And the way that manifests is not going to be standard robot stuff. So we’ll take away some of those powers because at some point everybody becomes magic, and I already have someone [a new character, Scarlet Witch] who’s a witch.”

This may be kind of obvious to those of us who know and follow Joss Whedon’s work. Of course he’s going to try to humanize the character because that’s what Joss Whedon does. Still, I’m looking forward to this second installment to The Avengers franchise. Very much so, actually. Is it 2015 yet?