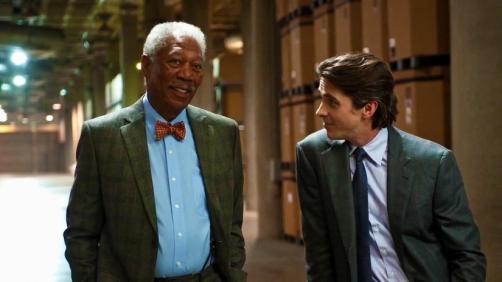 Someone forgot to brief The Dark Knight‘s Lucius Fox about Ben Affleck putting on the Batman suit.

“This is the first I am hearing of it,” said Freeman. “My first reactions are ‘Wow’ and ‘Good luck.’”

Yeah well, he didn’t pay much attention to how they did this for the Spider-Man franchise did he? The spider suit was still warm from having just been taken off by Toby Maguire when they put Andrew Garfield in the spidy suit and completely retold the spidy origin. Not that I’m bitter or anything. And we’ve all known it was coming for quite a while now.

Freeman said he was not necessarily waiting for a casting call to reprise his role as Lucius Fox.

“If the new movie does have a Lucius Fox I don’t think it’s going to be me,” said Freeman. “It doesn’t seem to work to mix characters in the movies. If you are going to change the lead character, you’re probably going to change all the characters.”