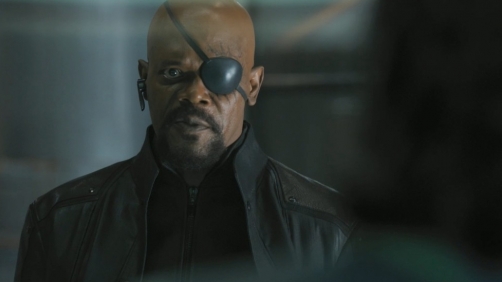 “You see Nick Fury the office guy, him going about the day-to-day work of S.H.I.E.L.D. and the politics as opposed to that other stuff. It’s great to have him dealing with Captain America in terms of being able to speak to him soldier to soldier and try to explain to him how the world has changed in another way while he was frozen in time. Some of the people who used to be our enemies are now our allies — him trying to figure out, “Well, how do we trust those guys?” or “How do we trust the guys that you didn’t trust who don’t trust you? And explaining to him that the black and white of good guys/bad guys has now turned into this gray area…..Nick lies to him all the time, too. (Laughs) But he’s trying to help him navigate the waters of the new sharks that he doesn’t know anything about.”

From the beginning, I’ve always felt that, though a good guy ultimately, there is a bit of a dark side to Nick Fury that could be/probably would be explored. The whole lying to move all the chess pieces in the right place thing is so not cool. I would love to see that dealt with a little more. In fact I would love to dive into Nick Fury more as a character. Quite honestly we haven’t really seen any character development of Nick Fury. He’s just been there as a motivator to other characters.