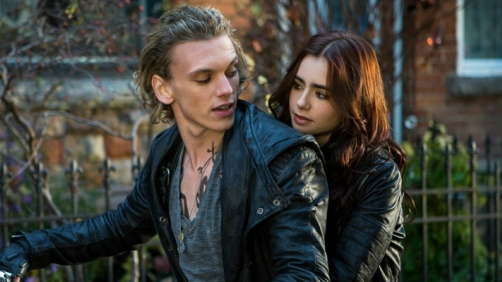 This film had all the makings, the trappings of a good fantasy film. But it uses those good elements it has to very bad effect. It plays a bit too much like a parody of the fantasy genre — ineptly moving from story beat to story beat without ever drawing the audience in or making us feel a real connection to the film.

It’s no wonder that this book series, and now subsequently, this film series is being made. Look at the success of the Harry Potter franchise in both book and film form. And truth be told, there is definitely something there. I am a pretty big fan of the Harry Potter series, mostly the books, and to a lesser extent the films too. But there’s a world of difference between this film, and any single one of the films or books in the Harry Potter series — and that difference is largely made up of the difference between both good story and good writing, and bad story along with bad writing.

We must too look at the success of the Twilight series, and other vampire/supernatural successes in the fantasy genre (The Walking Dead, The Vampire Diaries etc.) And I must admit that to some extent I even enjoy aspects of the Twilight series. So bear that in mind as I criticize this film. My criticism is not for a lack of love for the genre or other things like it.

The film starts out showing us the life of a seemingly normal teenaged girl. But almost immediately, we the audience are clued in that there is more to her life than she might know — knowing looks and glances between her mother and some dude. Talk of needing to tell Clary something important about her life. But suddenly, her life is turned upside down when she witnesses an apparently murder that no one else around her can see. And then, the very next day, her mother disappears, leaving her to untangle the trail left behind. She soon discovers there’s more to the world — and her memories — than she ever knew. There are people called shadow hunters and they hunt demons who would apparently (allegedly?) create chaos on the earth where they left unchallenged. But the world of the shadow hunters is under attack by one of their own who is power hungry. The struggle now involves Clary because this power monger is the one who kidnapped her mother.

I have no idea how well the books are written for I have never read them. But I can tell you that the film was very poorly written, using dialog that made my head spin with dizziness at times. Sometimes the dialog was passable, then all at once it would get downright laughable. And this is what made me question even the writing of the books: it felt like at times like they would try to shoehorn crazy dialog that didn’t belong into a scene. My assumption was that they were trying to fit well known lines from the book into the film.

Often times if felt like the screenwriter(s) didn’t know what to do with the characters, or which side of the conflict they were on. It wasn’t a question of keeping us, the audience, or the heroes in the dark on the subject, it was that the messages we were getting were quite confused.

If you’ve ever heard of a fanciful creature, it’s probably in this film: vampires, werewolves, warlocks, demons, angels, demon hunters, and more. This film has taken something from a great number of fantasy genres and mixed them all together. I’m not ready to condemn that sort of thing out of hand, but the problem is that here, in this film, it feels like just that: a mish mash of poorly thought out and poorly executed concepts. The only reason this film has vampires, for instance, is because apparently modern fantasies must need vampires — by golly that must be the secret to success. And throwing in some werewolves should help too. After all, it mixing vampires and werewolves worked for Twilight.

But these elements, if simply smashed together without a good story, do not in and of themselves make good fantasy. Above all, you need to have a good story in place. Harry Potter‘s best attribute is the story, hands down. And whatever you think of Twilight, there is actually a good story there. It is/was often hidden and masked by bad writing and poorly constructed romance scenes, but there is an enduring story there which I maintain to be the reason the films and books ever did as well as they did. Teen heartthrob romantic drama can only carry you so far, and I think that is evidenced by the poor reception this film is being greeted with. It has quite a bit of the same romantic triangle elements and cheesy love lines. But with no story to back it up, the film is not much more than a parody of the fantasy genre.

Are you sensing a pattern with my section titles. That word “inept” keeps cropping up. And the effects are no exception. There really isn’t much excuse for poor effects in the year 2013, and yet, we had them in this film. None of the otherworldly creatures were in the least believable. The most pronounced is a couple of the werewolf scenes — and one particular scene where there is a flash that reveals that a key character is a werewolf.

I have pondered just why the effects in this film are so bad, and I have to wonder, is it that maybe the effects weren’t as bad as I think, but that I was not engaged enough in the story to keep from noticing? I don’t know but it’s a thought.

Perhaps the key failing of this film is its foray into teen romance. Without warning, Jace is spouting off about how Clary is belittling the love they share together and that she was leading him on. I had barely even become aware that there was romantic interest between the two beyond the obvious immediate physical attraction. Then suddenly, a not very good for anything teen guy who has known Clary for years apparently is vying for her affection and talking trash about the other super powered guy who saved both his and Clary’s life.

I’m telling you, in case you couldn’t already tell, I’m so over the whole angsty teen romance thing.

This film isn’t even good at making fun of itself. There are painful times when the script obviously tries to take itself lightly and make fun of itself. And it fails miserably at it. This film is so bad that I cannot recommend it on any level. I’ve watched worse films, but not very often. I found the experience painful and excruciating and I have no desire to see anything in this franchise ever again. I went to the theater, hopeful that this film — this franchise — would land somewhere between The Twilight Saga, and Harry Potter. I was profoundly disappointed.