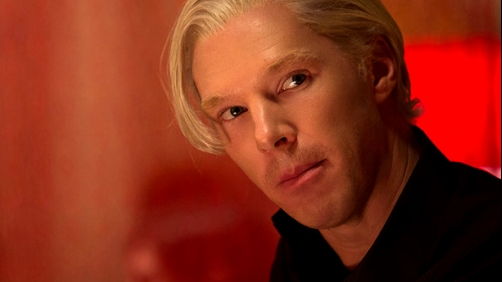 This week, WikiLeaks has thrown more fuel on the fire by posting a letter from Assange himself — purportedly sent to Fifth Estate star Benedict Cumberbatch immediately before the film began shooting in mid-January. The movie stars Cumberbatch as Assange.

You can click through and read the letter from Assange, but spoiler alert, he doesn’t like the film and/or it’s script, and thinks that Bendict Cumberbatch is nothing but a pawn in the game, doing him and the organization a disservice.

Assange calls Cumberbatch a “good” and “decent” person, but criticizes his decision to take on The Fifth Estate‘s starring role. “You will be used, as a hired gun, to assume the appearance of the truth in order to assassinate it,” he writes, saying that in the end, Cumberbatch is only “a jobbing actor who gets paid to follow the script, no matter how debauched.” He concludes by turning down Cumberbatch’s apparent request for a meeting: “By meeting with you, I would validate this wretched film, and endorse the talented, but debauched, performance that the script will force you to give.”

Cumberbatch addressed Assange’s letter Friday during a Reddit AMA (Ask Me Anything). Though his detailed, thoughtful response refrains from criticizing Assange directly, it also defends Condon’s film and explains why Cumberbatch wanted to take on the “contentious” character of Julian Assange.

Assange’s words, Cumberbatch writes, “gave [him] real cause for concern.” However, the letter also inspired Cumberbatch to examine his motivations for making The Fifth Estate: “He accuses me of being a ‘hired gun’ as if I am an easily bought cypher for right wing propaganda,” Cumberbatch says. “Not only do I NOT operate in a moral vacuum but this was not a pay day for me at all. I’ve worked far less hard for more financial reward. This project was important to me because of the integrity I wanted to bring to provocative difficult but ultimately timely and a truly important figure of our modern times.”

Cumberbatch goes on to applaud “the great successes of wikileaks and its extraordinary founder Julians Assange,” which he says are depicted accurately in The Fifth Estate – a “powerful, if dramatized entry point” for a discussion about WikiLeaks, in the actor’s words.

And this is what I expect The Fifth Estate to be. But I also expect to be torn about all of this much the same way  I am about WikiLeaks as an organization. I’m no fan of government secrecy and in many ways I appreciate what WikiLeaks is doing or trying to do. On the other hand, I often wonder if they go about things in quite the right way? I don’t know. But I have decided that the film is probably a good one. It would always have been hard to make a film that Assange and WikiLeaks actually liked.

The Fifth Estate makes its theatrical debut on October 18.