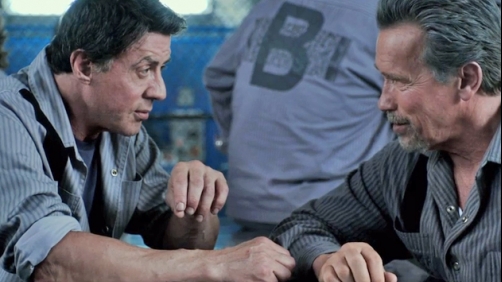 Is there room for old style action heroes in our modern day world? Is there something more than nostalgia going on here? I was a bit skeptical at first — well to be honest I was of two minds about it really. On the one hand the trailers actually looked good. It seemed as if there might be something more to this film than stupidity and face punching. On the other hand, how could a film with two actors that I loathe in general be any good? So I couldn’t quite decide whether I thought the film would be any good. That being the case, I simply had to go and see it so I could make a determination for myself. And as it turns out, it’s not bad.

The film opens with Ray Breslin (Stallone) in prison. But he’s obviously planning something. Had I not seen the trailers, I think the idea would have been for me to think this guy might deserve to be in here. But he makes his daring and dastardly escape. Come to find out, this guy breaks out of prisons for a living to expose the flaws in the system.

When Ray is offered a job at twice the normal rate for a private and somewhat shady prison that the government is apparently working on under the table — one that is supposed to be escape proof — he simply can’t turn it down. But, things aren’t exactly what they seem when a guy is killed for his bad behavior on the chopper ride to the prison and Breslin is kept pretty much on drugs the whole way. And he’s treated pretty rough too.

All is definitely going south when his evac code seems to have no meaning with the warden of the inescapable prison. So Ray must team up with inmate Emil Rottmayer (Schwarzenegger) to make his escape.

As I have already alluded to, I am not traditionally a fan of the brute force, beat ‘em to a pulp type old style action heroes. Indeed, I usually just cannot stand either one of these two headliner actors. But like many films, when there’s a decent story to tell, the actors can prove themselves well, and that’s what has happened in this film in my estimation. In fact I would say that this is undoubtedly the best role I have ever seen either of them in. Stallone here is in his element. A lot of brawn and nerves of steel backed by a little bit of intelligence (far more that I have certainly ever seen him display as an actor) and a man who seems to have something in his past that bothers him a little.

Schwarzenegger too was surprisingly good. Normally he always comes off so cheesy and insincere. I think in this case he was both cast right for the role, and must have had a really good director. The other obvious thing going on here is that while good old Arnie played an important part, he did not play the lead part. And it seemed that the editor and director knew exactly when to cut to and away from the guy to keep the cheese factor to a minimum instead of hanging on him and reveling in the cheese as tends to happen in his films. (Also as a side note, man does that guy look so much better with the beard in his old age!)

What I would say I was most impressed with however is that the plot actually had a little bit of substance to it and a couple of nice plot twists. I won’t reveal them so as not to spoil it for you, but if you’re expecting it to be obvious, then you’ll be pleasantly surprised I think.

Jim Caviezel was a marvelous villain as well, perfectly balancing the menace of his character with believability.

What I enjoyed most however, even though I’m not a fan, was the camaraderie between the two old action heroes. There was obviously a bit of chemistry there, no doubt fueled by the fact that they are both older and experienced actors within their genre.

There was a couple of unfortunate things in this film however, despite my enjoyment of it. For one thing, I didn’t quite understand Ray Breslin’s relationship with the character Abigail. It is never really brought out. There’s obviously some sort of relationship there, but I was confused — and this is going to sound really silly but I honestly was — about whether she was supposed to be his girlfriend, his wife, his daughter (she was a lot younger) or just someone who works for him who also cares a lot about him.

And while were on the subject of unclear characters, what was Hush’s role in the film again? He was a needlessly inserted character with nothing to do and was completely irrelevant to the plot.

Additionally, Lester Clark’s motivations for selling out his boss are completely unclear. Why did he do it? Why do we care? What was the point? Unfortunately in these characters, the film feels like it was written by a complete and total amateur on only his first pass of the script. It’s frustrating for what was otherwise a decent bit of fun and action.

I may be no fan of these two giants of the industry, but even I could tell that near the end of the film, a couple of lines from these guys were played for the nastolgic laughs. It should of course come as no surprise that part of the climax is Arnold grabbing a big old machine gun and blasting several of the bad guys to smithereens. Are you surprised? I didn’t think so. But by the time that does happen, it’s okay because the film has earned it. Most of the film is played very well with only a couple of laughs from Arnold here and there (“you hit like a vegetarian”). So by the time we get to the fun lines and blasting a few people ever so slightly unrealistically away, it seems deserved.

I was expecting to be disappointed by this film and I was not. It actually seems like a pretty good option in the box office right now all things considered. And definitely, if you like older action films, you’ll want to see it. But even if you don’t, and even if you actively hate Stallone/Schwarzenegger, give this one a try, you might be pleasantly surprised.