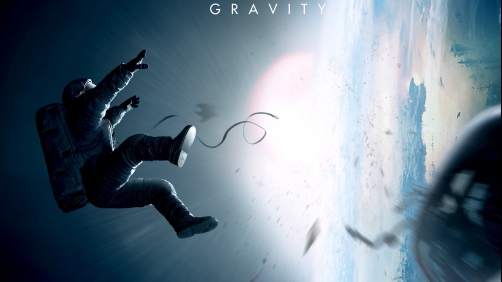 Of this you can be certain: I have no plans to ever, EVER go to space. While I have always been very fascinated by space, I have also always feared it a lot. Well, I mean it didn’t keep me up too much at night because I’m down here on this nice comfortable planet that has a nice comfortable atmosphere for me to live in. That’s the way I like it thank you very much. But I have always thought in the back of my head that, no, I would not like to ever visit space thank you. All those contraptions and air and whatnot to keep you alive? That all looks so flimsy and fragile compared to the vastness of space.

After having watched Gravity however, I can now safely say I am absolutely TERRIFIED of space and you could not offer me enough money to go there ever. Not ever, ever. Do you understand?

I have also contemplated my exact feelings on this review for a while now. It’s all somewhat difficult to describe. Someone texted me right after the film and asked me what I thought. I told them I would let them know when I was done cowering under my theater seat in fear. This, of course, was hyperbole. None-the-less, Gravity was an awe-inspiring and wonderfully terrifying experience. At any given point in the film, you could almost always find me on the edge of my seat wondering what was going to come next.

From the very outset the mood and the tension of this film is set. The very minimalist and few opening credits are accompanied by music that swells, and swells… and swells. Soon the tension of the music is at a fever pitch. Then at once, smash cut to silence. Thus begins an oh, so slow camera pull out from earth to finally reveal the Hubble telescope and the shuttle that is effecting repairs and whatnot on it. The sound is slowly turned up to the point that we can hear the radio chatter. And that’s really all we hear. For the most part throughout this film, we only ever hear what our fair space-fairing protagonist can hear.

Speaking of our protagonist, she is one, Dr. Ryan Stone (yes, she), played by the ever lovely Sandra Bullock. But this is Bullock as you have never seen her before. This is not the RomCom, or a cornball comedy (or a fairly poorly executed buddy cop comedy) that we’ve come to associate Sandra Bullock with. No, quite frankly this is the acting gig of a lifetime in my opinion. Her role here is played with prodigious, masterful skill. She fully convinces us of the courage she finds as the movie progresses from her starting point as a first time astronaut and fairly terrified of space — and of course much more terrified when she is ripped from her tether and flung into the void. Not once does she utter a silly line or a ironic comment — again as we’ve come to expect from Sandra Bullock’s various roles over the years. I really believed she was who she played.

And as our story unfolds, we come to care for her and her plight. We see, retrospectively, the pain of her loss, and believe it when the time comes for her to almost give in and stop struggling.

While we speak of protagonists, there’s only one other such person in this film. In fact, there’s only one other person in this film who gets any face time. That would be Dr. Stone’s commanding officer, Matt Kowalski played by George Clooney. His performance too was just fine, although next to Sandra Bullock he looks like an amature. I don’t mean that in any way as a slight upon the acting of Clooney. His lightness of nature and attitude make the first act of this film fun and entertaining. And at first, he really makes you believe he and Dr. Stone are both going to get out of all this mess okay.

Another thing this film has in its favor is beauty and majesty. What’s more impressive about this is that I’m given to understand that much of this film was created with CGI. Given the nature of what Alfonso Cuarón is doing here with this film it’s not really surprising. What is very surprising is that I could almost never tell that any of it was CGI. Folks, we’ve come a long way on this front in a few short years. My common sense of course knew the answer, but often my brain was wondering how on earth they got up in space and shot this movie because it really does look like that’s where it’s taking place. Of course I was watching it on a fully qualified IMAX screen in 3D so maybe that was helpful. I would say, in fact, that this is the first film I’ve see in 3D that didn’t look cheap. The 3D did not distract me, it did not stand out, it did not look like paper cutout. There was no gimmickiness to the 3D. It really and truly only enhanced and was used where needed. With that said I do think what was important in my viewing experience was more the size and massiveness of the IMAX screen, not the 3D so much. There were a couple scenes that really seemed to benefit from it though, I must say. And though I still had that familiar 3D headache at the end, it seemed to be slightly less than normal.

But above and beyond all, the film was majestically beautiful. I’ve never seen such a beautiful rendering of space and earth and the stars — that massive void that surrounds our fair planet. It was awe inspiring. Even though I know it is obviously all possible because I just saw it, I still wonder how on earth they were able to capture some of those scenes.

Another stand out characteristic of this film is the extremely long takes. The opening shot alone goes on for several minutes. I suppose on the one hand that this technique is one of the benefits of rendering almost everything in CGI, but it’s still impressive as our two actors come in and out of the frame and as the camera pans and tilts around. It’s like a hand in glove approach with the beauty and majesty as we pan around and become immersed in the world by this single take approach and nature of the film. There’s a scene in particular — and I could not even tell you whether it’s all part of the continuous opening scene or whether there was a cut in the film before this point because even the cuts were that well executed — where as Dr. Stone has been flung away when she released herself from the tether and she’s hurtling away, that we do a few laps around her, then the camera goes inside her helmet. And then, continuing in one long take, we see from her perspective for a while as she tries to get her bearings and get “landmarks” (that word doesn’t really apply in space, does it?) and relay that information to Kowalski. Finally, the camera smoothly comes out of her helmet and we’re panning around her again. It’s all fluid and smooth and brilliant. And until recently probably wasn’t even possible. It’s quite amazing and works very well for this film.

I have just one complaint about this film, but it’s a bit of a whopper, and ultimately why I did not give this film five stars. In revealing this I will have to delve into a spoiler. You have been warned.

The plot hinges on this one point so that Dr. Stone is the only survivor. It is the self-sacrifice that Kowalski makes so that Dr. Stone may go on without him and possibly make it. This bothers me for three reasons. 1) I think her chances for survival would have realistically been better with him because of his much broader experience and cool head. He knew how to pilot the shuttle, he had necessary knowledge. His sacrifice does not make a lot of realistic sense. This is a big standout issue because of how realistic this film otherwise is. 2) From very early on I predicted his sacrifice to myself. I thought, according to formula, at some point he’ll need to sacrifice himself for some silly situation so that she can go on. Which brings me to: 3) his sacrifice didn’t make much logical sense because the reason for it didn’t make much sense. They’re in space, their tether to each other has accidentally been severed by the high speed and thin edge of the equipment that passed between them. As they are hurtling by, her foot becomes entangled in a mass of cables which stops and saves her from hurtling towards Earth. He goes flying by and she’s able to grab the dangling, severed tether, which she is barely able to hang onto and stop him. But the problem is, now the line is taut and it’s a struggle for her to hold on to him and she can’t reel him in. Why? They’re in space. The momentum has stopped. They’re in Zero G. She should be able to easily pull him toward her now that his momentum has stopped and they should be able to go on together. There were some other minor things that didn’t make sense, but this one is a big irritation to me. It made no sense, NO SENSE! I nearly lost my composure and yelled out at the screen in frustration at this point so intense are my feelings on this matter.

On the bright side, there was one other point at which I was ready to be extremely upset with this film. but it turned out okay. Around the commencement of the 3rd act, as Dr. Stone is oxygen deprived, Kowalski shows back up in his space suit outside the air lock. She’s in too much of a stupor to react quickly so he opens the airlock, exposing her to vacuum as she cowers with her hand over her face, lowers himself into the cockpit, and turns the air pressure up. They commence a conversation. Problem: HUMANS CANNOT SURVIVE EXPOSURE TO THE COLD AND VACUUM OF SPACE FOR ANY LENGTH OF TIME. I am tired of sci-fi getting this wrong.

However, as it turned out, this scene took place in the good Doctor’s delirious dream state. So all was well.

The question now is can this film win an Oscar? I certainly think it will be a contender this year and will be deeply disappointed if it is not at least nominated. This film has everything I want out of a good space drama. It has good story, great visual story-telling, only one misstep, and a whole lot of drama and tension.

If you have not seen this film yet, get yourself to the theater, and preferably (keep in mind I rarely say this) an IMAX. It’s that good, people!