Harrison Ford and Mark Hamill Behind the Scenes of ‘Jedi’ 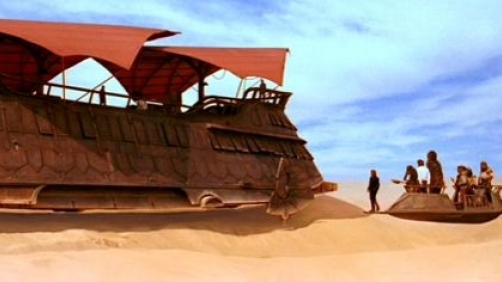 In the video below shot on April 12, 1982 during filming on Return of the Jedi, we see Han Solo (Harrison Ford) calling Jabba the Hutt out as a “slimy piece of worm-eating filth” (a slight variation on the “worm-ridden filth” line from the film) while Luke Skywalker (Mark Hamill) warns the Hutt to “free us or die” as crew members look on. Reading Jabba’s lines are none other than ROTJ director Richard Marquand, who also shouts out orders to stuntman Dicky Beer, who plays Jabba’s skiff guard Barada. The scene ends with everyone — cast and crew — looking off and marveling at something in the distance while Harrison Ford informs a woman on the crew of his character’s current post-hibernation vision status: “George said I can see now. It’s blurry, but I can see.”

The video is an “exclusive” so I can’t embed it here but it’s a lot of fun. Click through and watch it!