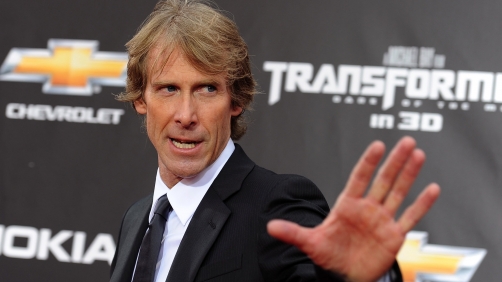 Here’s something Michael Bay can get asked endlessly about when he does press for Transformers: Age of Extinction.  According to THR, the director was attacked on the Hong Kong set by two local men, reportedly brothers, when he refused to pay them $13,000 (U.S.).  Bay don’t play that way, and an argument ensued in which the director got punched in the face.  One of the men then tried to fight off three police officers who intervened.  The brothers were then arrested on suspicion of blackmail and assault (I’m pretty sure we can at least confirm the suspicion of assault).  Bay then resumed filming.

My only question is how the brothers got so close to the director in the first place.  Film sets, especially for mega-blockbusters like Transformers, are well guarded.  Also, I’m surprised the brothers thought they could get $13,000 on the spot.  I know his movies are dumb, but it’s a bit of a stretch to believe Bay would go, “DURRR, OKAY”.

This is way better than any of his Transformers films. I need some popcorn!

Also, are we sure he hadn’t just watched one of Bay’s horrible Transformers films and needed to let some anger out on the guy (I’m totally kidding you guys, I don’t condone the violence).

Paramount and Bay have both issued statements on the incident, which is, as it turns out, even more bizzare and funny than the story that was going around.

Contrary to several erroneous news reports, Bay did not get hurt in a fight on his set. The production company did have a rather bizarre encounter with a man (allegedly under the influence of a narcotic substance) who was wielding an air conditioning unit as his weapon of choice.

The young man, who had earlier accosted several other crew members, barreled onto the set in Quarry Bay and swung the cumbersome appliance directly at Bay’s head. The director ducked and wrested the air conditioner from his attacker, preventing what could have been a serious accident. The company’s security team quickly stepped in and subdued the assault. The police, who also scuffled with the assailant and two of his companions, ultimately arrested the three men. No one on the cast or crew was injured and the production immediately resumed filming without further incident.

Yes, the story is being passed around is not all true! Yes, some drugged up guys were being belligerent asses to my crew for hours in the morning of our first shoot day in Hong Kong. One guy rolled metal carts into some of my actors trying to shake us down for thousands of dollars to not play his loud music or hit us with bricks.

Every vendor where we shot got paid a fair price for our inconvenience, but he wanted four times that amount. I personally told this man and his friends to forget it we were not going to let him extort us. He didn’t like that answer. So an hour later he came by my crew as we were shooting, carrying a long air conditioner unit. He walked right up to me and tried to smack my face, but I ducked threw the air unit on the floor and pushed him away. That’s when the security jumped on him. But it took seven big guys to subdue him. It was like a Zombie in Brad Pitt’s movie World War Z—he lifted seven guys up and tried to bite them. He actually bit into one of the guards Nike shoe, insane. Thank god it was an Air Max, the bubble popped, but the toe was saved.

Then it took fifteen Hong Kong cops in riot gear to deal with these punks. In all, four guys were arrested for assaulting the officers.

After that, we had a great day shooting here in Hong Kong.