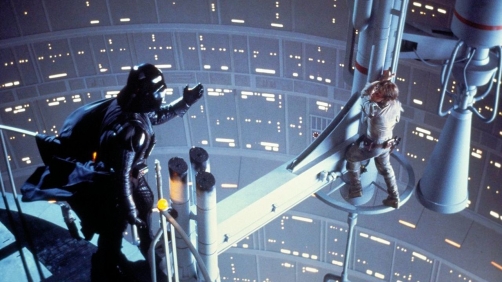 But maybe the biggest difference is that, when communing on the Degobah-like planet (aided by Minch, not Yoda), Luke actually comes in contact with the ghost of his father. And that father isn’t Darth Vader. As Ryan notes, “this pretty much proves that the Vader-Luke, father-son relationship was not Lucas’ plan all along.”

Well, phooey. I’m not a big fan of Lucas’, but I’ve always defended him on this when he says Vader was always supposed to be Luke’s dad. But apparently not. Of course the other explanation is that the Leigh Brackett (original screenwriter of this less then stellar draft) either was no informed that this was what Lucas wanted, or simply didn’t buy it and therefore couldn’t write it.

But it’s neither here nor there.

Lando is, for some reason, a clone in this version, and he escorts our rebel friends to dinner where Vader is waiting for them, but in this original version of the script, they actually all sit down to dinner, where Vader halfheartedly apologizes for being a dick to Princess Leia and Han Solo gets good and stinkin’ drunk. (This is what happens when you rob one of the biggest twists in cinematic history from one of your central characters; instead Vader suggests Luke replace the Emperor as a semi-benevolent ruler of the Empire.)

Let’s just be really glad that this version of the film never made it to the screen. Instead we got one of the best films of our time. The sad thing is that, with or without Arndt in the picture, it is unlikely JJ will be able to make a film as good, even anywhere near as good as The Empire Strikes Back. There, how’s that for your daily dose of pessimism?