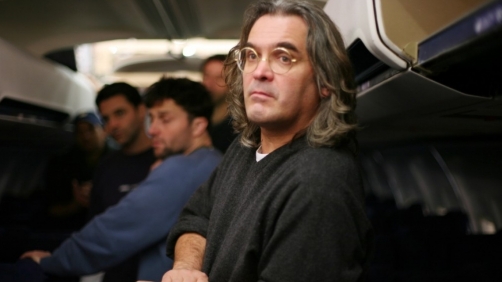 Of course like any Hollywood movie, the events are dramatized to make them more cinematic, but most of the facts in the film stay true to Phillips’ account of the story. The only problem is, Phillips wasn’t the only one there, and now his ship’s crew has come out publicly to dispute the events and even blame Phillips for the whole mess. Of course, the crew is currently in a lawsuit with  Maersk Line and the Waterman Steamship Corp. for almost $50 million, alleging “willful, wanton and conscious disregard for their safety.” And yes, Phillips is a witness for the defense. So there may be other motives in these comments.

This is related to an item I posted last week on Tuesday.

Honestly I haven’t wanted to say too much about this since I didn’t know a lot. But this whole thing from the crew member(s) didn’t smell right. “Captain Phillips had a death wish,” Captain Phillips ignored pirate warnings” etc. etc. As I said in last week’s episode of The MovieByte Podcast, they somewhat dealt with this in the movie. It was really quick and brief, but it did address crew members complaining and wanting to turn back and not do their jobs. The fact is, they did sign on for a somewhat dangerous job.

I’m glad you asked that! I saw those stories too, based upon an “anonymous crew member”. Here are the facts. Shortly after the Mersk Alabama incident was successfully resolved, and Captain Phillips returned home safely, some members of the crew sued Mersk Corporation claiming they had been put in harm’s way. They also alleged that Captain Phillips had ignored warnings to stay away from the coast of Somalia. When we started the film, it was a top priority for me to look into this issue in every detail. And I obviously can’t comment on this lawsuit, but what I can say is that myself, along with my colleague Michael Bronner formerly of 60 minutes, with whom I worked on United 93 and other projects, we researched the background of the Mersk Alabama highjacking in exhausting detail over many months. We spoke to every member of the Alabama crew bar one, all of the U.S. Military responders that played a leading role in these events, and thoroughly researched backgrounds of the 4 pirates and the issue of Somali piracy generally. And I’m 100% satisfied that the picture we present of these events in the film, including the role playing by Captain Phillips, is authentic. I stand by the picture I give in the film, absolutely.

In particular I am confident that Captain Phillips did not take an irresponsible route along the coast of Somalia and ignore a specific warning as alleged in the press. The route he took was similar to that taken by many ships of many nationalities at that time and since. The problem of piracy at that time was that pirate bands had begun using motherships, which enabled them to strike at ships throughout the Indian ocean, up to 800 miles plus out to sea, if not further. The film shows clearly Captain Phillips receiving warnings about pirate attacks, putting into place security measures onboard ship. The film also shows a vigorous debate with some members of the crew who wanted the ship to deviate from its route in order to prevent attack, and I show Captain Phillips (as I believe occurred) arguing that there was no point deviating the route, because pirate bands with motherships could attack them wherever they went. At the end of the day, it is easy to make anonymous accusations against a film. But the facts are clear. Captain Phillips’ ship was attacked, and the ship and the crew and its cargo made it safely to port with no injuries or loss of life. Also, the fact is that Captain Phillips went into the lifeboat in order to ensure the safety of his crew, because thereby he insured the pirates left the ship. The fact is, Captain Phillips then endured a five day ordeal at the hands of his kidnappers that very nearly resulted in his being killed. That’s the story we told, and it’s an accurate one.

Now of course, any film you have to compress events and alter certain details to make sure that a 5 or 6 day complicated chain of events works as a 2 hour movie. And whilst our film does not reflect every detail of what every single crew member did during the highjack [and I appreciate this may have upset some members of the crew], the film does very clearly show that all members of the crew worked heroically and independently from Captain Phillips to ensure the safety of the ship and that specific members of the crew, for instance Mike Perry the chief engineer and Shane Murphy the chief mate, played very significant personal roles in the successful outcome of the highjacking. I believe that when looked at overall, the film does acknowledge the admirable contributions of all crew members and of specific individuals, so of course, though as I say, some of the specifics may have been lost in the 2 hour turn. I stand by my film, and if there’s a bit of sour grapes around, I put that down to the fact that to be in command of a ship – as I know from my father’s experiences – is often a lonely place. And you don’t win popularity contests as a captain. Your job, and certainly Richard says by his own admission, he was a professional merchant marine captain and he faced a dreadful challenge that day in the middle of the ocean far from help. And the ship, the crew, and the cargo reached port safely. I don’t quite understand what there is to criticize…