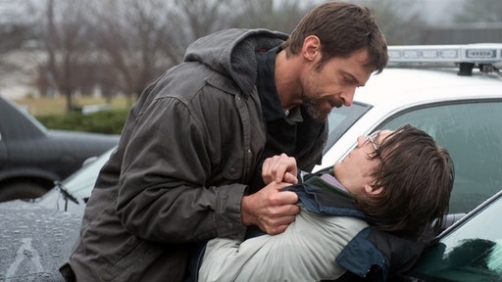 Keller Dover (Hugh Jackman) finds himself living every parent’s worst nightmare when his six-year-old daughter goes missing. The only lead? A battered RV that was parked on the street only hours before. Heading the investigation is Detective Loki (Jake Gyllenhaal), who tracks down the RV’s driver (Paul Dano) and takes him into custody. But when lack of evidence compels the suspect’s release, and police fail to turn up any more leads, Dover decides to take things into his own hands.

Your child has been abducted. Time is running out. What do you do?

But Liam Neeson is nowhere to be found in Denis Villeneuve‘s Prisoners. It’s all well and good if you’re an ex-military operative with weapons and a ‘history of violence,’ but Keller Dover has none of these. He’s an ordinary working man, a devoted father driven to extremes by the conviction that his daughter’s kidnapper is walking free.

So he does something about it. He crosses lines. He gets his hands bloody.

And as I watched him, it all felt so terribly, horribly real.

Forgive Us Our Trespasses…

This isn’t an indulgent Deathwish-style revenge fantasy. Suspension of disbelief is never required, nor was I at any point startled by the lengths gone to by Dover to find his little girl. This is precisely why the film as a whole is so intensely unsettling. I could see myself in Dover. I could palpably feel his desperation. I even tried to rationalize his behavior, because given the same situation and no restraining hand of God, I could imagine myself doing the same thing. Maybe more.

But the rationalizing didn’t work. Not for me, not for Dover. The morality of the thing is clear-cut, even if the characters are not, and as punishing as the physical violence is, the violence done to the character’s soul is still more brutal. This point is driven home with brilliant clarity when Dover attempts to recite the Lord’s Prayer – and stumbles over “forgive us our trespasses.” Why? Because of the second part: “... as we forgive those who trespass against us.”

Clearly, Prisoners is interested in digging deeper than the average Hollywood film - which may be too deep for some. It is a tense, well-acted, and wonderfully complex mystery-thriller; it is also, and perhaps more so, a meditation on vengeance and violence and the providence of God (I would elaborate further on that last point, but it would require spoilers, and I hate spoilers). In sum, this is a film that wants to bother us. Not pointlessly, not merely to see us squirm, but with the goal of making us think.

And that’s a good thing.