The Agents of SHIELD 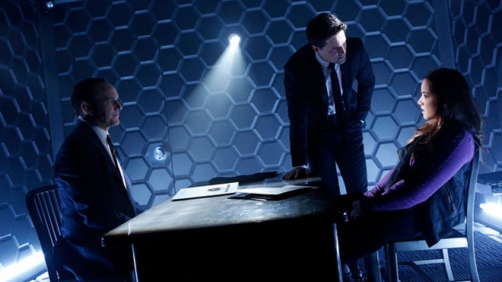 I have really been enjoying the new Marvel/ABC show Agents of SHIELD. It seems like just what I wanted to fill the gap left by the end of Fringe and the cancelation of my favorite new show last year, Alcatraz. I won’t pretend that SHIELD is yet as good as Fringe was, but it has the potential to be. And it ties into the large, Marvel Cinematic Universe — what’s not to like about that?

Well, apparently there’s something not to like about this show because you can’t swing a dead cat without hitting someone who’s ragging on the show for some reason or other. I have to wonder why that is and I think I know. It’s legend and hype and things no show, not any show ever, could live up to. This is the fundamental problem we have right now. It does not appear to me that there’s anything at all wrong with the show. The problem is us — and when I say us, I really mean you because I’m loving the show. But this is worthy of exploration.

See, here’s the thing. Amongst many of us, Joss Whedon was something of a known figure. He’s someone who knows how to create great fictional worlds and tell good stories with a sense of fun, wonderment, self deprecation, irony and a lot of other things that you may not even notice, but all contribute to your liking of his content. But until he directed The Avengers (I don’t even know exactly how that happened because, wow, that was a big deal), he was something of a known with only a cult following. But in a post-Avengers world, the hype has begun to build. Our normal, everyday friends began to hear from us Joss Whedon faithful about how good he is, what great shows he has created, and just what to expect moving forward now that he has the reigns of the Marvel beast. Then Agents of SHIELD was announced and subsequently ordered to series. The hype built up to a fever pitch.

But then the first episode (finally) landed, and many — even the Joss Whedon faithful — seemed to cry foul. They were upset and angry and generally disliked the pilot. I think everyone forgot that it was a pilot just like any other pilot. It was awkward in some places, overwritten in others, and generally had a pilot feel about it. Do you want to know why? Because it was a pilot episode. Did you know every single other one of Joss Whedon’s TV shows went through the same awkward pilot stage? Frankly, for a pilot I felt it was mighty doggone good. But because the general populace and the nerd populace placed the upcoming show on such a pedestal that it was impossible to attain to, people were disappointed.

Honestly, I think you all need to go back and watch the Buffy pilot — one of Joss’ most celebrated TV shows. Talk about awkward and pilot-y. I mean, I love Buffy, but that entire first season has it’s issues and if that’s all we ever saw from Buffy, we certainly would not have had Joss at the helm of The Avengers.

Seriously guys. You all really need to chill. Agents of SHIELD is shaping up to be a really good show and it has so much potential. I know we don’t love the characters completely just yet, but did we love the characters from Buffy in the first three episodes? Of course not. We had just met them and were getting to know them. The same is true here. They are starting to grow on me/us, but we’re not there yet. We will be, just give it time. Like any show, we have to get to know it. So relax and enjoy having a Joss Whedon-helmed show on the air again. Enjoy the doggone good writing and the wonderful wittiness we’re already seeing. Just enjoy it!