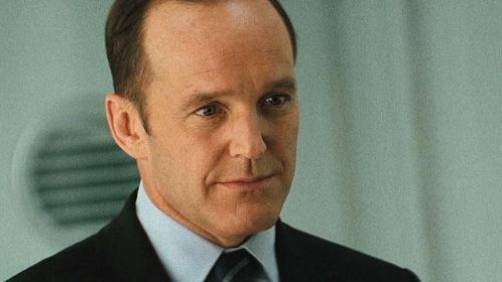 It’s the big mystery of the fall TV season: How is Agent Coulson actually alive?

Marvel’s Agents of S.H.I.E.L.D. has yet to answer the question on how the team’s fearless leader Agent Phil Coulson (Clark Gregg) is still kicking after being stabbed in the chest by Loki (Tom Hiddleston) in The Avengers. But Tuesday’s episode did offer up another clue that could point us in the right direction. Let’s first take a look at the clues we’ve already been given:

“Pilot”
Agent Coulson lives! Coulson believes that he died very briefly, but was then revived and went on holiday in Tahiti to heal. Later, Agent Maria Hill (Cobie Smulders) ominously says that Coulson can never know the truth about his death, possibly giving credence to our theory that Coulson is a Life Model Decoy. Dr. Streiten (Ron Glass) also notes that he would be happy to keep Coulson from going into the field.

I don’t know what Natalie means by, “Life Model Decoy” but I have definitely been theorizing about what’s going on with my wife. One thing is for certain: not all is quite as it seems with Coulson.

I am theorizing that the current version of Agent Coulson is a clone of the original. That’s what I’ve theorized since the end of episode one upon talking with my wife. A lot of signs point to it, many of which, the linked article goes on to talk about it (lack of muscle memory interpreted as being rusty, etc.).

Whatever the case, there are definitely some interesting plot twists coming for Agent Coulson!