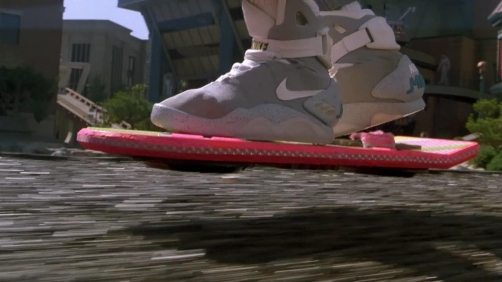 I expected our resident Back to the Future aficionado to want to post something about this but he has been utterly silent. So I’ll go ahead and let you in on what has been going on.

A few days ago, a website popped up called huvrtech.com. That website had a video of Christopher Lloyd, among others, promoting the new “Hover Board” technology. He drove up in a DeLorean!

Even though it was obvious the video was fake and a good bit of fun, I thought it was quite enjoyable. But much of the Internet seems to have been a little irritated after the folks behind the video kept up the ruse for a few days. Many seemed to think it was an insult to their intelligence. I certainly was not one of those. I thought it was fun. For a clue into what I’m talking about. Watch this video.

So finally (FINALLY! at long last, blah blah), Funny or Die came out with the truth. They released a video of Christopher Lloyd apologizing. I thought it was hilarious. This whole thing has been wonderful.

So yeah, this whole thing was pretty awesome. Just you try to deny it!