Two roads diverged in the forest, but Animal ate one — What To see This Weekend 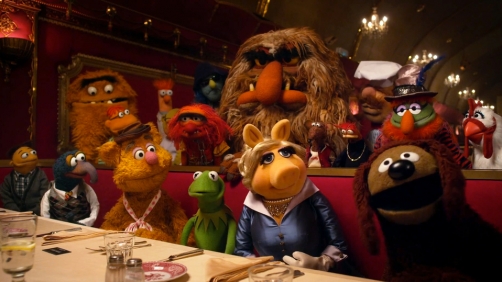 It’s that time of the week again. It’s time to decide what you want to see in the theaters this weekend. I shall talk about two new films, one of which I am quite certain will be good. The other one, well, we’ll have to see. I kind of want it to be good, but I kind of don’t think it will be any good.

I’ve been spending some time getting caught up in Muppet world. I know I’ve seen various Muppet shows and movies throughout my life, but I really only remember The Muppet Babies on Saturday mornings. So I’ve gone back and watched several movies, and I’ve been watching a few episodes of the old Muppet Show. The older movies have been hit or miss, the old show is pretty much just delightful, and I really loved the new 2011 film simply titled The Muppets (really though, they couldn’t have given it a more clear, less confusing name?). So in that light, I’m looking forward to this film a lot.

Chad and I had some things come up that made The MovieByte Podcast impossible this week but we’ll be back next week, and this film will be our primary topic. I expect that we’ll love it and I expect you will too. So this is my top recommendation for the weekend.

I want this film to be good but I have a bad feeling about it. Chad has been talking about how much he likes the books and all, but there’s something very cheesy looking about the trailers. And it feels like this series has just been tacked on to the YA craze to me. As much as I want to like the look of it I just haven’t been impressed. But it’s on the docket for The MovieByte Podcast after Muppets Most Wanted so we’ll find out soon.

If this were playing anywhere near me, and if I was finished watching the series, I would be rushing out to see this. Unfortunately neither of those things are true. In order to see this fine looking film, you are going to need an AMC theater to be nearby. We don’t have one of those in the Nashville area, unfortunately. Even more unfortunate, what with life, work, House of Cards, and other current TV shows going on, my progress on the seres is slow. I do like it and can’t wait to see the film though.

On the eve of graduating law school, Veronica Mars has put Neptune and her amateur sleuthing days behind her. While interviewing at high-end New York law firms, Veronica Mars gets a call from her ex-boyfriend Logan who has been accused of murder. Veronica heads back to Neptune just to help Logan find an attorney, but when things don’t seem right with how Logan’s case is perceived and handled, Veronica finds herself being pulled back into a life she thought she had left behind.