Mr. Peabody’s Empire Rises From a Hotel — What to see this weekend 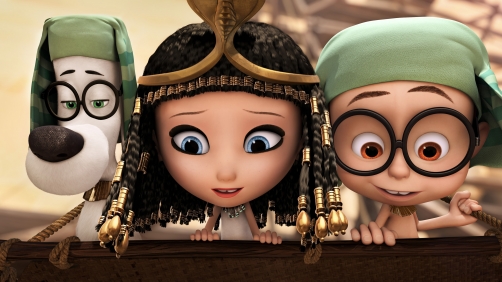 I know which one of the three new film I would like to watch this weekend. Unfortunately I’m trying to be the “good guy” and acquiesce to the needs and desires of my esteemed MovieByte Podcast co-host. Chad has absolutely no desire to see 300: Rise of an Empire. Of the three I think I would enjoy it the most. Mr. Peabody and Sherman would be my second choice I suppose. But this isn’t all about me (sadly enough).

Starring Eva Green looking evil, ludicrously tall evil “god” king, water, ships, and slow motion! To be honest I don’t think the first film in this series is as great as many seem to think it is. That said I did enjoy it. Then again, part of the reason I enjoyed it as much as I did was because of Gerard Butler. Since his character is [SPOILER] dead, I don’t see how he’s going to be in this second film and therefore I’m not sure how much I will enjoy it. Then again, again, Eva Green looks appropriately menacing and terrifying. I expect this installment in the series to be about the same as the first — which is to say slightly better than mediocre and entertaining.

I suppose this film will be okay, I don’t know. It looks a little goofy and silly to me. It looks as if it’s trying to be something like what Pixar would put out (or would have put out back in the day) and trying to hard to do so. I don’t know. Perhaps I’m just a bit jaded or spoiled by Pixar or something like that. Part of me thinks that it could be fun. And Chad certainly thinks it’s going to be great, which is why he insisted on this film for the topic of the next MovieByte Podcast.

See or not: Sure, go see it. It should be fine.

This film just looks stupid, with a lot of inappropriateness thrown in for good measure. Seriously, it looks way over the top in that way that I just find to be incompatible with my film watching tastes.

The Grand Budapest Hotel tells of a legendary concierge at a famous European hotel between the wars and his friendship with a young employee who becomes his trusted protégé. The story involves the theft and recovery of a priceless Renaissance painting, the battle for an enormous family fortune and the slow and then sudden upheavals that transformed Europe during the first half of the 20th century.