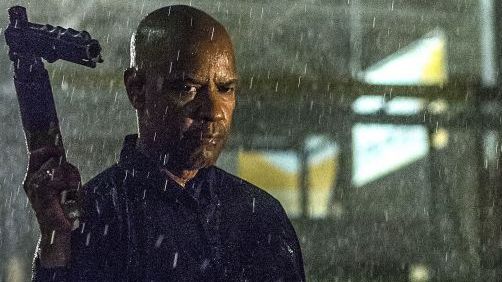 Denzel Washington is an interesting actor. He is the son of a Pentecostal minister, but describes himself as a bit rebellious in his teenage years. Then he had a religious experience which he describes as being filled with the Holy Spirit 1, after which time he has been a devout Christian.

Growing up — and even now — I sort of got the impression that his Christianity is often called into question by the more conservative element of the Christian community simply because of the sheer number of R rated films he has been in. From my perspective now, this is silly. In fact, many good and highly recommended films are rated R that I would have no problem with. Discernment is of course advised, but sometimes you can’t tell a good, human story without that R rating. We are a violent and sinful bunch, us humans, and so to tell true and good stories, R ratings will sometimes apply.

Take the film Flight that Denzel Washington starred in. I had some quibbles with the film — and I think the sex scenes could have been portrayed without showing us the nudity (and yes, I do think that good films can and even should portray sex scenes when the story calls for it, but that’s another conversation) — but I don’t think that story could have been told well without the R rating. And this is also an example of how Denzel chooses his roles. He has said on several occasions that he tries to choose roles that he can turn in some way into something redemptive. And it seems to me that he often succeeds.

What is an Equalizer?

Robert McCall is an Equalizer, that’s what.

Robert McCall (Denzel Washington) is former black-ops for the CIA. He’s now retired and living somewhere in Boston. At first (for 60 or so seconds anyway) McCall might seem like he’s living an average, ordinary life. He works at “Home Mart” (think Home Depot), he’s trying to help a friend/fellow employee make it through the gauntlet as a security guard at “Home Mart”, he reads a lot, and that’s pretty much it. But as I said, there’s more than meets the eye.

When something bad happens to someone — say maybe a dirty copy is extorting money from people, or “Home Mart” is robbed and the robber also takes a friend’s prized ring given to her by her deceased husband — he feels compelled to intervene in the situation. As a trained special forces operative, no one is any match for the man. He appears to be no threat, but he’s in control of whatever situation he finds himself in at any given time.

While he’s doing all this, we also find out that he can’t sleep at night and so he reads all throughout the night 2.

He likes to go to a particular diner to read where he usually at some point in the evening will have a conversation with a (very young) prostitute, Teri (Chloë Grace Moretz), who frequents the establishment as well. Unfortunately, her Russian “employers” 3 are not happy that she hit one of her clients — never mind that he was abusing her. Through these unhappy circumstances, she becomes hospitalized. This, as you might imagine, does not make McCall a very happy camper.

He thinks he’s dealing with a typical sex trade type situation, so he intervenes. He actually tried to negotiate and just buy Teri’s freedom. He is refused and then jumped. So he kills everyone in the room.

As it turns out, he just killed several important people in the Russian Mafia and he’s in deep. But he’s in it for the long haul now and it’s clear what he must do, make it so the Russian Mafia is no longer a threat here.

The Equalizer is quite a slow burn. It feels no need to dive in with action and suspense. Instead, director Anton Fuqua spends a lot of time with our primary antagonist(s), letting us get to know them, their lives, what drives them, what their lives are like, and more. In short, he brings us to care about the characters. It would be very easy, for instance, to simply let us assume that Teri’s life as a prostitute for some very bad people with no way out is a sorry plight and she needs rescuing from that. But Fuqua does not take that for granted. He wants us to care for her. He wants us to understand that she’s trapped, she has no way out, and that she’s quite miserable.

We spend some time getting to know some of McCall’s co-workers at “Home Mart” as well. In particular, we get to know Ralphie (Johnny Skourtis) who wants to be a security guard but has a little bit of weight he needs to lose and generally needs to get in shape.

The building up and time spent with these secondary characters is quite refreshing.

We spend the most time, as you would expect, with Robert McCall. I generally like his characterization — who doesn’t like a badass good guy — even if he’s sometimes a bit too over-the-top and too good to be true. While this is certainly not Denzel’s best performance ever, he brings a little something different to the table than he has in any other role I’ve seen him in — which he does tend to do. His detached professionalism and serenity are what really drives the role home. He doesn’t quite seem crazy or psychotic, but he’s almost there. And yet he is fully in control of every situation he finds himself in.

The Russian Mafia and the thugs and master minds we meet throughout the film are truly terrifying. Marton Csokas’ character in particular is quite brutal and realistic. His presence on screen commands your respect and terror. He kills easily and in cold blood. He’s not here to play patty cake. The stakes are real and the prices are high.

There is, unfortunately, a sense throughout the film that McCall can do no wrong. He makes no missteps in his action sequences and dealings with the bad guys, he always does the right thing or wants to. He has nowhere to go and no growing as a character to do, he just is. It’s almost as if he is what God would be were he not all-powerful.

I also found it odd that the cops where hardly ever around unless the script occasionally called for them to be. The ones that were around were corrupt and usually on the Russian Mafia payroll.

I also occasionally found it just a bit off that when surrounded by many men with guns, guns hardly ever went off (except for the final scene). In particular, one of the primary action set pieces where McCall kills the Russian Mafia men that is the catalyst for the rest of the action in the film, it takes him 19 seconds to dispatch everyone, and yet he’s never shot in those 19 seconds.

As the film progresses it gets more and more far fetched — eventually asking us to believe that he single handedly fought his way past every Russian Mafia thug to the big boss in Russia himself where he easily dispatches him. It’s sort of a great feel-good moment, but one that’s pretty unbelievable.

And finally, at 131 minutes, it’s a tad overlong. I could have done with cutting 20 minutes from the film.

I rate it 3.5 of 5 stars and it’s certainly not a bad film. It has, in fact, much to redeem it. It’s a bit bloody and violent — there were times when I cringed and even had to look away — but the fundamental story is sound and one that connects with you on an emotional level. As well, it offers a satisfying end of justice that can be just what you as an audience member wants at times. On those levels, if you are over 18 and have the stomach for the R rated violence and blood, I can recommend it.