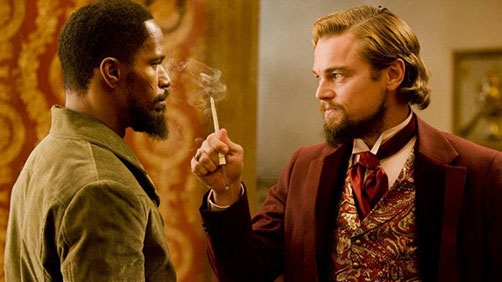 Christopher Waltz who won an academy award for his performance as the chilling and charming Nazi Colonel Han Landa in Inglourious Bastards is just wonderful as the German/dentist/bounty hunter in Django.  Charming, funny, kind, but with a dark streak.  Jaime Foxx really comes into his own in the second half of the film, and Samuel Jacksons turn as an old plantation slave is amazing.  Leonardo diCaprio has a wonderful time playing the villainous plantation owner.  The script is good — Tarantino has a real flair for how to tell a story, and he makes sure that one small thing that happens early on in the film pays off in a big way at the end.  I love that when a writer makes it work.

I have been waiting to read this until I was able to see Django myself. I figured it was worth linking to. Melinda was on The MovieByte Podcast to talk about an episode of Star Trek she wrote called The Measure of a Man, which is essentially an allegory about slavery and what makes someone human, what gives them their rights and more. She obviously has a soft spot for this sort of thing so it was good to see her perspective on Django.